RESTAURANTS AT ALBISPASS (16km or 26km):

Albis Wirthshaus, or Inn of the Albis, which affords only moderate fare of accommodation, but a magnificent prospect

Today, you can only enjoy food and drink at the Albishaus, which uses local ingredients from neighbouring Langnau am Albis, with dishes starting at CHF 10.50. No ascent of the Albispass is complete without making the additional effort to climb the extra 600m up to the historic restaurant, where you can enjoy the “magnificent” view over a rewarding drink. [menu].

St. Mauritius was a proper Swiss saint. Well, a proper Swiss saint who was born in ancient Egypt and was a soldier in the Roman army before eventually becoming leader of the 6,600 strong Theban legion, dispatched with orders to clear the St.Bernard Pass across Mont Blanc.

Despite offering his military allegiance to Rome, as a Christian, he refused to engage in wanton slaughter and that service to God superseded all else, including his Emperor, Maximian, and the Roman gods, whom he also refused to worship. 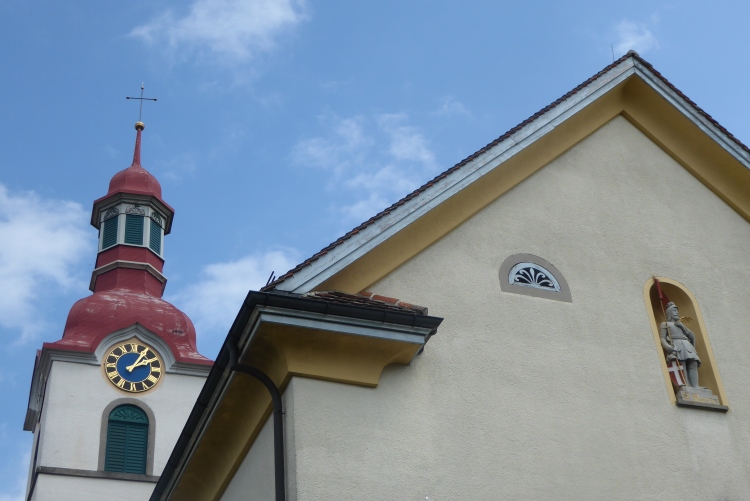 When Max ordered the Theban Legion to harass some local Christians, they refused. As punishment, the Roman Emperor ordered that every tenth soldier be killed, a military punishment known as decimation and possibly the scariest lottery you could ever buy a ticket for.

As Maurice and his men grew more obstinate, refusing further instructions from Rome, a second decimation was arranged before Maximian grew so impatient he ordered all the remaining members of the 6,600 unit be executed (that would be 5,346 if my maths is correct and the previous decimations had gone to plan). History doesn’t state if this was done in further rounds of ten, although I’m sure that InFront Sports in Zug would have been awarded the TV rights, with Maximums allocating 85% of the tickets to sponsors and friends of the FIFA-family. 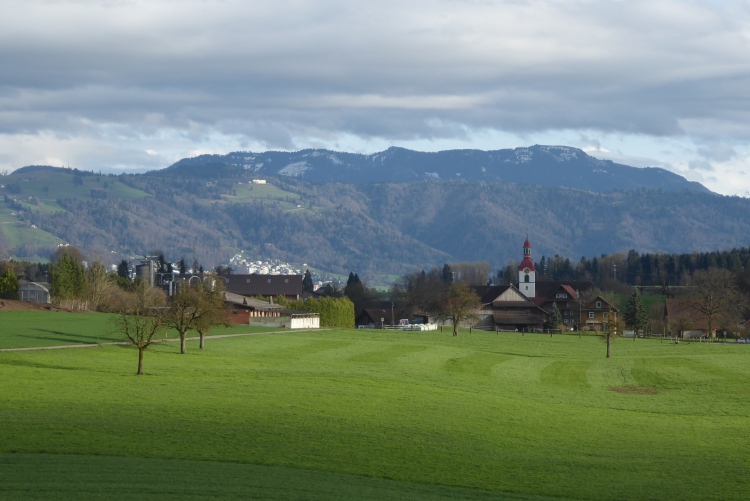 The mass execution is said to have taken place at Agaunum – now known as Saint-Maurice d’Agaune, 240 km south in the canton of Valais; the spot now being the site of the impressive Abbey of Saint Maurice-en-Valais.  However, again, this being religion, historians and researchers have struggled to find anything to confirm whether or not the story of the Theban Legion is based on truth, fact or evidence.

It was normal for members of the military in those days to follow Isis – the Egyptian god, not the Islamic State – meaning it would have been incredibly unlikely that an entire squadron would consist of Christians. Either way, the story certainly achieved its aim in attracting pilgrims to the abbey at Agaunum. 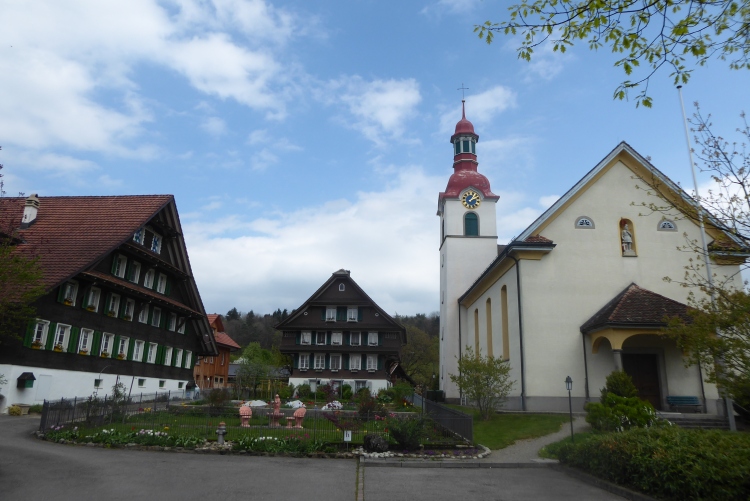 Switzerland seems to have taken the story of St.Mauritius to heart; as well as Saint Maurice-en-Valais, he has given his name to St.Moritz, as well as seven churches or altars in Aargau alone – the canton itself being given to the abbey by Henry I in return for Maurice’s lance, sword and spurs; a transaction that must have made a monk or two smirk. As well as Einsiedeln Abbey, there are six churches in his honour in Luzern, four in Solothurn, one in Appenzell and this one in Zug.

St. Maurice had been portrayed as a black African knight ever since the 12th century, however due to the developing slave trade in the mid-sixteenth Century, he suddenly enjoyed a Michael Jackson colour change, much to the approval of the SVP (Swiss People’s Party), explaining his pale complexion here in Niederwil. 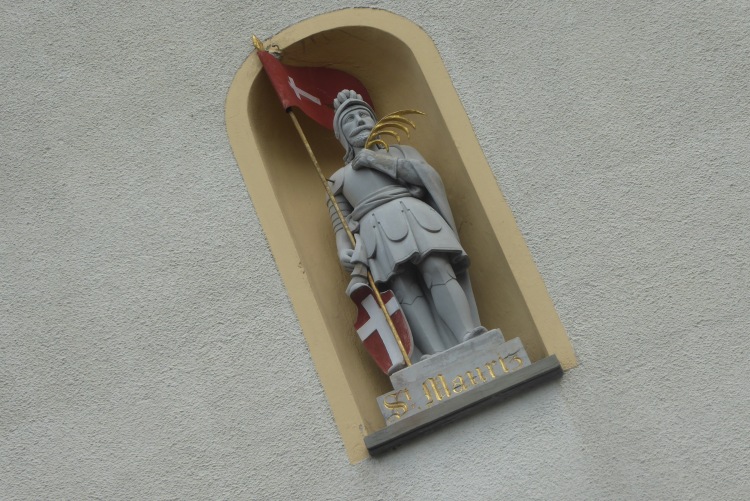 The route continues across the main road at Rumentikon, passing near the Ziegelei (Brickwork) Museum, through somebody’s farmyard and an extremely steep unpaved woodland path. 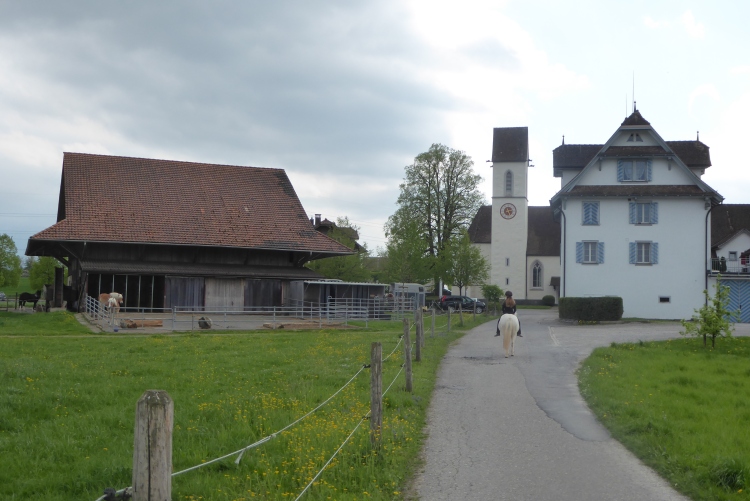 Alternatively you can also head to St.Wolfgang along a brief stretch of the “good carriage-road”, heading up the hill at Kloster Heiligkreuz instead, which was only a small school during Murray’s time, with construction on the huge monastery not starting until 1862. 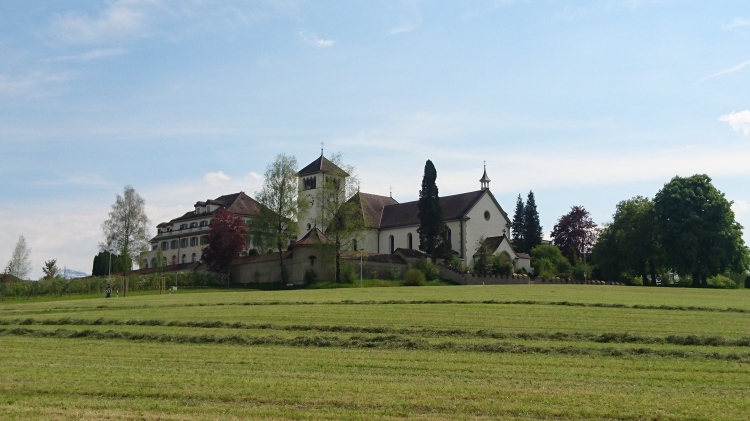 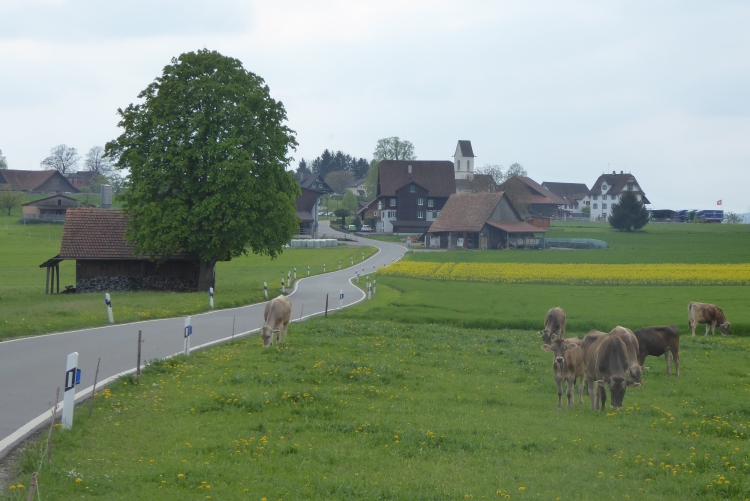